Would J. Edgar Hoover call participants in residential service corps ‘the most dangerous people’ in America? 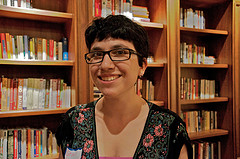 This is how Hoover referred to Jane Addams, co-founder of Chicago’s Hull House, a settlement community established in 1889. The residents of Hull House were primarily upper-middle class American-born individuals.  They frequently had the personal financial stability to volunteer for Hull House’s programs full time, working with the low-income people who lived in the neighborhood where Hull House was located.  They had their own small apartments in Hull House, but none of the apartments had kitchens. Instead, they cooked and ate meals as a community, and would have salon-style conversations over meals.

Most importantly though, the residents provided cultural and community services to their neighbors, mostly recent immigrants, residents of the low-income neighborhood in which the home was located.  They primarily taught English language classes, as well as sewing, cooking, and trade classes.  They had a youth theatre program, where residents would watch the children of people in the community and put on (primarily patriotic) plays with them.  Yet, at Hull House, after the residents were done teaching their classes, they went to their comfortable apartments and didn’t have to worry about their next meals or paying rent.  Even if Hull House as settlement home was not necessarily financially stable, its residents remained comfortably so.

I am currently doing a year of service in Chicago, and the parallels to my experience are clear: I make a very small salary, but I have guaranteed housing stability, and cook communal meals with my housemates that keep food costs low. The privilege of this financial stability, a stability I’ve enjoyed for my entire life, is one of the many things that enforces a class divide between me and the communities I work with as a financial educator and case manager at Heartland Alliance.

I constantly talk to my housemates about how our privilege intersects with the lives of the participants in the programs we work with. Looking at the example of Hull House encourages me to turn the critical eye I use to look at history onto myself and my own actions.  While my future path likely does not include social work, I still feel as if I have a lot to learn from Addams’ teachings and actions.   My reflections on Hull House inform the intentionality I bring with me to work and to day to day life, and come together to help me better understand the history behind the work that I am doing.

Perhaps Jane Addams was having similar conversations.  When she met Leo Tolstoy, he criticized her for not working the land enough.  Despite this, Addams was such a voice in the fight that criticized the fundamental structures that enforced poverty in the United States, that Hoover gave her the label, “the most dangerous woman in America.”

If Hoover were alive today, I doubt he would label any of my fellow corps members “the most dangerous people in America”. Our society has evolved to embrace service as a method of social change – and I’m proud to be living Jane Adaams’ legacy.

Staci Akselrod is from Pleasantville, NY and just graduated from
Hampshire College, where she studied Jewish identity and its
representations on the Yiddish stage.  She lives in the Chicago bayit
and works for Heartland Alliance as the Asset Building Program Aide.
In her spare time, she knits, spins, and loves to roller skate.  She’s
super excited to get to write about her work and to have the
opportunity to read about the work Avodahniks are doing across the
city!

One Response to Would J. Edgar Hoover call participants in residential service corps ‘the most dangerous people’ in America?