What We Witnessed At The Border

Posted on August 29, 2018 by Avodah
Every morning during the month of Elul, we are instructed to blow the shofar to awaken our slumbering soul. Rabbi Alan Lew describes the shofar as “an ancient alarm–it was something that we blew at a really desperate, urgent time.”
Right now we face an urgent time that demands that we wake up, take notice and work toward justice.

Last week, Avodah’s Executive Director Cheryl Cook and Deputy Director Steve Bocknek represented Avodah as part of a delegation of 17 national Jewish organizations to the US/Mexico border to witness the experiences of immigrants and asylum seekers and to help identify how the Jewish community can meaningfully respond. We met with men, women and children seeking asylum in the United States, those who were recently deported to Tijuana, as well as refugee resettlement staff, asylum attorneys, representatives of U.S. Citizenship and Immigration Services, and the Consul General of Mexico. Jewish tradition teaches us the importance of bearing witness and after 20 years of direct service work, we know how important it is to be proximate to the issues we hope to impact and the people we are trying to empower.

Violence, extreme poverty and persecution in neighboring countries have created levels of desperation that are hard to fathom. In Tijuana, we visited Instituto Madre Asunta, A.C., a shelter for women and children, where many had fled rape, the most brutal forms of gang violence, and extreme poverty. They are waiting, hoping to claim asylum in the United States so they can have a better life. We saw women sitting quietly, while their kids played in the small courtyard, or napped in their laps. Sister Adelia Contini, who directs the shelter, estimates people now wait between three and four weeks before they can apply for asylum. Their lives hang in limbo as they wait.

At Casa del Migrante, a neighboring men’s shelter, we met with director Father Pat Murphy. He told us that in the past, the men would typically spend a few nights at the shelter while on their way north as farmworkers. Now, they often spend weeks or up to 11 months. 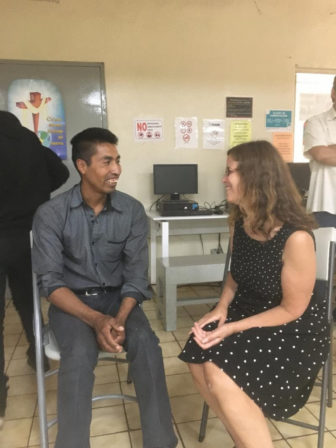 Upon entering the men’s shelter, our group recognized two young men, P. and F., sitting on a bench. Just a day earlier, the pair had been in San Diego for a mass “Operation Streamline” hearing, a joint DHS/DOJ zero-tolerance initiative to border crossing that began in 2005. It mandates that nearly all undocumented immigrants crossing the Southern border be prosecuted through the federal criminal justice system in group hearings. Up to 70 people can be tried at the same time. Some cases are handled in a matter of hours, from arraignment to sentencing to deportation. Due to the rapid processing, those who should be able to request asylum, are often not given the opportunity to do so and may have to serve a prison term, despite possible eligibility for legal protections.

P. (pictured right), 34, agreed to tell us his story. He is married and the father of four. At home, he was unable to make enough money to support his family. “My wish was to cross, get a job, and send money home. I wanted to give my children a better future.” When asked if he would try to cross into the U.S. again, P. broke down crying, explaining that he wouldn’t; his son had begged him not to. That said, he wasn’t sure what he’d do next. The second man, F., 24, commented that it was exceedingly difficult being detained in a cold holding cell with bright lights on at all times. The men are fed just one meal a day and given inadequate water, while shackled to 18 others. “I didn’t do anything violent, like a criminal. Why did I have to be chained?” F. asked.
Both P. and F. were deported at the end of their immigration process. Father Pat Murphy said, “deportation is like a near-death experience.” 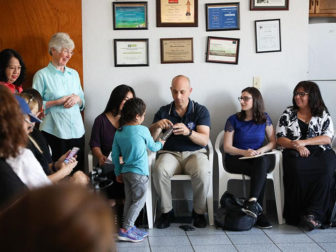 In San Diego, we visited a children’s shelter for unaccompanied minors. Most of these children, ages 6-17, were sent to the US alone, fleeing horrific violence, and brought through the border by smugglers.They were arrested at the border and sent to holding cells, until eventually being brought to the shelter, run by the not for profit Southwest Key.
They arrive scared and traumatized by what they’ve left, but also by the experience of being arrested and sitting in what is essentially a jail cell. It was described that they receive inadequate blankets, food and water. The children are restricted to just two 15-minute phone calls per week.
There are 12,000 children housed in shelters across the United States as they apply for asylum, according to the Office of Refugee Resettlement. While many of the children have family in the US who would care for them, new rules that require fingerprints be sent to the Department of Homeland Security, deter relatives from stepping in out of fear they that they and the children will be deported. The children can be placed in foster homes and we were told there is a great need for more foster families.
While it is clear that the staff at these centers care deeply, the individuals are nonetheless depleted, hungry and experiencing terrible trauma.
Pictured above: a young girl visits with members of the #JewsAtTheBorder contingent during a visit to a women and children’s shelter in Tijuana. Photo by Jennifer Liseo/ADL.

We went to the border to witness our immigration policies in action, and came away understanding more deeply the brokenness of the system, and the way it dehumanizes people and families. While policies like family separation have made recent headlines, our immigration policies have been in need of repair for many years and we must all pull together to solve it. 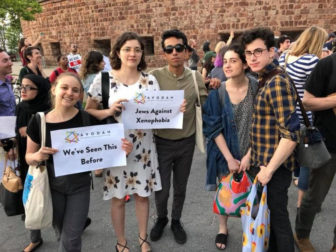 For 20 years, Avodah has been on the frontlines of these issues. Our Corps Members (pictured right) are serving at nonprofits for immigrants, asylum seekers, and refugees, including HIAS, NIJC, CAIR, CASA, Sanctuary for Families, New York Legal Assistance Group (NYLAG) and more. We will continue to partner with these and other organizations, to train the next generation of Jewish leaders to work for social change.

As Rosh HaShanah approaches, we are called upon to reflect on this past year and take stock of our impact. As we welcome in year 5779, we will not forget the people sitting on both sides of our border. We will pledge to speak up, stand up and find new ways to take action to play a role in repairing years of broken immigration policies and inhumane treatment.

5 Things You Can Do: