The View from Madison 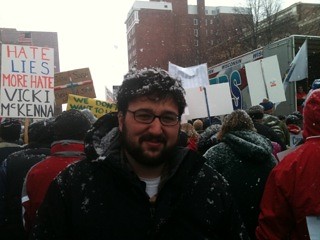 Let me give you a glimpse of my past few weeks: Last Saturday I joined 100,000 of my fellow Wisconsinites to express dismay at our governor’s plan to dismantle collective bargaining rights for public employees. The Saturday before that I joined 80,000 fellow Wisconsinites (1,000 of whom apparently were drinking tea). The Wednesday prior I joined about 30,000 in our state capitol and observed the most courageous political act I have ever seen as the “fab 14” Democratic state senators fled the state to avoid a vote on this atrocious bill. And, the day before that I woke up and walked past the capital as I do daily and saw something that was even more remarkable than 100,000 people collectively expressing outrage and demanding justice.

On that walk I saw a public genuine outrage that I had never seen before. There were probably less than a hundred people protesting, mainly union workers. It is difficult to articulate why this small protest was actually the most amazing. I could not have expressed it then but in retrospect I sensed both the conviction that this issue evoked, but perhaps also a sense that something historical was starting.

I am a cynical law student and AVODAH Alum living in Madison and not one for protests in general. I found AVODAH so appealing because it gave me an opportunity to explore social justice in a professional setting where I felt more comfortable working to affect change. Yet, now, I find myself outside for about an hour everyday chanting with the rest. And most surprisingly I really believe this will make a difference because this is about more than Wisconsin and more than collective bargaining. This is about how we want our country to function politically and substantively.

I’ve been asked to consider how my Jewish identity relates to my decision to participate in the protests. It’s not a question I can easily answer. I heard a Rabbi speak at a rally last week and he cited various passages from the Torah praising labor rights. I can’t honestly say any of those passages are my driving force. But, I don’t know if I would be in law school or at these protests if I was not Jewish. Perhaps it is historical memory or an ingrained cultural value. I do not know. What I do know is “justice” is a word that resonates with any Jew I have met. And that justice is not always found in a court room or a voting booth, sometimes; maybe the most important times, it is only to be found in the people. 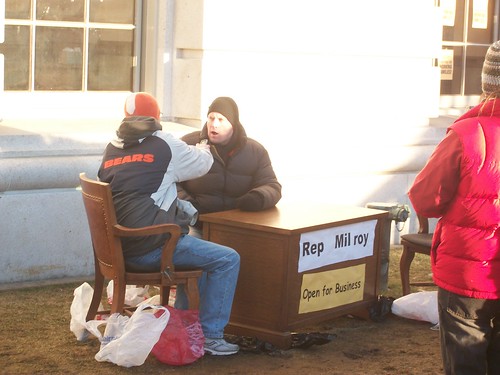 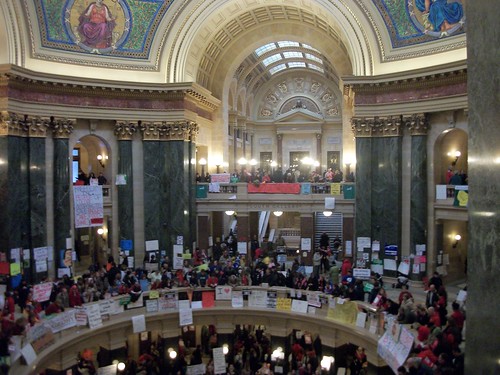 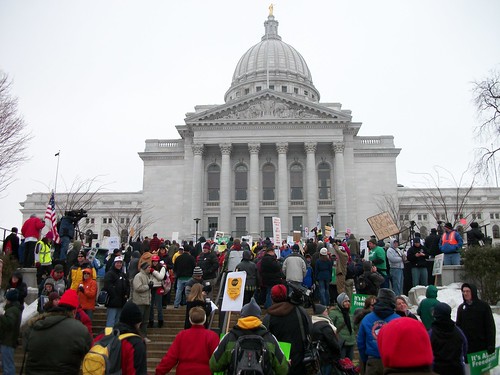 One Response to The View from Madison