In honor of Pride Month, we are highlighting queer Avodah alumni like Abi Weber. We sat down to talk about her experiences as a queer Jew who was recently ordained as a rabbi. 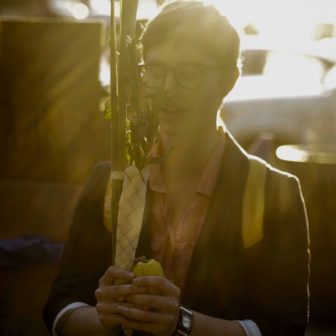 Abi Weber (Avodah Chicago alum 2011-2012) has had a busy year. In addition to navigating the COVID-19 pandemic, she finished her final year of rabbinical school, planned for an interstate move, and she and her wife welcomed their first child. In July, the family will be relocating from New Jersey to Philadelphia so Abi can assume her position as Assistant Rabbi at Temple Beth Zion Beth Israel. She is a proud queer Jew who is passionate about being a role model for younger congregants, but it took a journey of self-discovery to get here.

Growing up, Abi always looked for ways to make the world a better place. In high school, Abi served as president of her local chapters of United Synagogue Youth and Amnesty International. But in her college years, she struggled to find ways to fit social justice work in with her Jewish leadership roles. She sought a way to reconcile her “deep love” for Judaism with social justice. Enter: Avodah. One of her friends and mentors in college did Avodah in Chicago. Abi visited her and stayed in the Avodah bayit.

“I felt so connected to Avodah right away. It was a great way to bring together Judaism and social justice — they didn’t need to be different parts of my identity anymore. I could do direct service and be committed to doing social justice inside and outside of the home,” she said.

Avodah’s Service Corps program also allowed Abi to explore her queer identity. Living communally among queer people and allies gave her space to unpack the heteronormativity that had been engrained in her. It caused her to rethink the assumption that she would marry a Jewish man. She recalled that everyone in the bayit was making OkCupid profiles at the time, trying to figure out what dating post-college looked like.

“I went on a date with someone who had heard of Avodah. She actually thought it was a queer Service Corps specifically, because she knew so many queer people who did Avodah. It just made me so happy that it was her mistaken impression,” Abi laughed.

One experience that was particularly transformational for Abi was when Avodah Chicago’s program director planned a learning day for the cohort with Rabbi Benay Lappe, who, at the time, was just expanding an organization called SVARA. Rabbi Lappe gave the cohort a now well-known talk that compared her experiencing the collapse of heteronormativity to the collapse of the Temple, and how Judaism had to reinvent itself based on the past and shape itself for the future.

“Suddenly, queerness wasn’t something that could get in the way or sit opposite of Judaism. Queerness is the Jewish experience — in the sense of having your world need to shift in response to a crisis,” Abi said.

Today, Abi continues to explore social justice work as she shapes her career as a rabbi. She wants to deepen her social justice work within and beyond the Jewish community as a rabbi, while also pursuing her passion for Jewish leadership and text study. “I could be with people in their lowest moments – upon the death of a loved one, during an illness or struggle – as well as their highest moments – at weddings and b’nai mitzvah and through the rhythms of life Shabbat to Shabbat. I could be a transmitter of Jewish tradition in big and small ways, including the Jewish tradition of making the world a better place.”

Abi also hopes to serve as representation of queerness in the Jewish community and shared some advice for congregants who are not yet out in the community:

“Finding the right space is so essential, whether that’s a queer dance party or studying text with SVARA. Wherever you’re located, remember there are a lot of queer Jews out there, and one identity has a lot to teach the other. If you’re ready to come out and other people aren’t ready to hear it — let them be not ready. Do what feels right for you.”