Reflections on the Passover Seder

Emily Hoffman is from Charleston, SC and attended Wesleyan University. She is a Advocate at Neighbors Together, a soup kitchen and comprehensive assistance program addressing the immediate crisis of hunger for the poorest people in the Bedford-Stuyvesant/Brownsville section of Brooklyn.

Like most other Jewish traditions, the Passover Seder has been evolving for centuries. From the days of Rabbi Akiva and his colleagues gathering together in Bnei Brak, to the Freedom Seder in 1969, the central Jewish liberation story has been expressed in countless ways by myriad tellers with many different intended morals and meanings.

The thing that is most fascinating to me about the story of Passover is the way it has become the archetypal framework for so many people seeking freedom. I think the most notable example of this is the way black American slaves adapted the narrative to their own story. In the 19th century, many referred to themselves as Israelites, Harriet Tubman as Moses, and the Northern United States as the Promised Land. In the 20th century, it was Martin Luther King Jr. who cast himself in the role of Moses, declaring that he had been to the mountaintop but might not make it to the Promised Land.

The parallels between the Jewish liberation story and those of other peoples, particularly black Americans, were first acknowledged in the format of a Seder during the Freedom Seder of 1969. Held on the first anniversary of Martin Luther King’s assassination, the ceremony brought people of multiple racial and religious backgrounds together in a black church. Since then, Jewish people have used the Seder to commemorate the story of countless groups they belong to or wish to represent who are seeking or have found liberation. These Seders have ranged in focus from women to laborers to Darfurians, to many more groups of people.

My personal experience with the Seder has evolved, as well. I grew up participating in Seders with my family and our friends. We followed the traditional structure, but abbreviated much of the service and read most parts of it in English. When I began college, my Seders closely reflected the developments in my Judaism and politics. During my first three years I helped plan and participate in queer/feminist-oriented rituals. For me, this was liberating in and of itself, as I grew up in a Jewish community that was quite patriarchal and did not give much voice to women or their issues.

Senior year I co-taught a seminar called Contemporary Radical Jewish Thought, in which our major class project was putting together the school’s official Seder. We put together a Hagaddah that combined more traditional elements of the Seder with pieces of our own stories and those of other peoples who have experienced oppression. We also focused on alternative ways to perform blessings and honored our Jewish heroes who are not usually recognized in that light, like Karl Marx.

This year, my housemate Avital and I decided we would take on a Seder as one of our projects as April point people, monthly leaders in the AVODAH community. We browsed Haggadot from groups including Jewish Voice for Peace, the Progressive Jewish Alliance, and Uri L’Tzedek. We took bits and pieces from these groups and others, but decided we would limit the text of the Haggadah in order to leave more room for creativity and discussion during the ceremony.

While we generally followed a traditional structure, we framed it in a way that highlighted what we find important and interesting. This included everything from discussions of food politics to singing Yiddish liberation tunes from the 1930’s. For the Maggid section of the Seder, during which the Passover story is told, we played improv games in which we imagined what we might have done in the situations of our ancestors. Our Seder also included many Debbie Friedman songs and a Prince of Egypt singalong. Enjoy the pictures below from our seder: 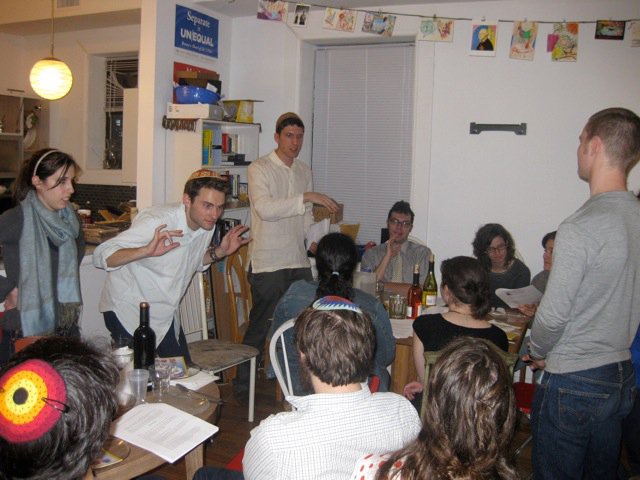