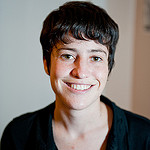 By Nicole Storrow
Eleven years ago today, I was standing in front of my friends and family proud to be reading from the torah for the first time and recognized by my community as an adult.  I remember preparing to give my D’var on Shemot as a thirteen year old and feeling connected to these concepts of morality, and doing what is right. In middle school and high school, right and wrong often seemed black and white. I usually knew when my peers were doing something cruel or unethical, and the decision was whether to take part or speak up. As I have gotten older, “right” and “wrong” have become less clear. The “bad guys” and the “good guys” are often both victims of a failing system, both real people with stories, and it is up to us to sort through the facts and decide what we believe in and how to fight for it.

As an AVODAH corps member, the questions from Shemot bring on new meaning. In the torah portion, God comes to Moses in a burning bush and tells him that he will send Moses to Pharaoh to free the Israelites. Moses’ first response is “Who am I that I should go to Pharaoh and free the Israelites from Egypt?” There are various interpretations of the phrase, “Who am I?” Some say Moses is humbled or overwhelmed by the enormity of this endeavor. Rabbi believes his response is more literal, referring to Moses’ speech impediment, and questioning how he can be a mouthpiece of a people when he himself cannot speak perfectly.“Who am I to speak” is a question I often ask in my work, not because of a physical inability to speak but because I am asked to speak about things I have had little exposure to. I find myself asking, “Who am I to be speaking on poverty and discrimination in a city I’ve just moved to for the first time?  Who am I to be speaking to schools on behalf of the Latino community and pushing for language access when I have always grown up in schools that were taught in my native tongue?”

As the year progresses I am still seeking answers to these questions. I am trying to speak less and listen more, understanding that I may never completely understand what my clients are experiencing. I can only hope that the families I work with will sense my humility and my sincerity and that the resources and languages I have been given access to will help me to support and empower the people I work with. I am humbled by the opportunity to learn while doing work that I care deeply about. I hope that I will continue to struggle with these questions and recognize the privileges I have that have brought me to where I am.

In Shemot, Pharoah responds to Moses’ plea for liberation with further restrictions on materials and higher expectations for production. Similarly, in my work things often get worse before they get better, but this doesn’t mean they aren’t improving, just that we have to be patient. It takes faith and courage to speak up knowing change won’t be immediately apparent.

In the work I do in schools, parents who are not fluent in English are often left in the dark about their kids’ education and treated with disrespect just because they speak a different language. The parents that speak up are sometimes targeted by administrators or verbally harassed. But instead of trying to slip under the radar and get whatever services they can, they risk being further ostracized and they speak out.

I remember asking a parent after her son was being verbally harassed by school staff if she would prefer that we send a letter to the school or not say anything, wanting to respect any fears she might have about further retaliation. In Spanish she explained, “No. Send the letter. What’s most important is not whether or not the school is mad at me, but that my child knows he is not alone and that other people care and are watching”.  Her courage and belief in bigger change inspired me, and I’m confident it will positively impact the way her son handles injustices when he is older.

I also see this issue when working with prisoners who are being abused or treated unfairly. It is inspiring to see people in some of the most vulnerable positions in our society, people who are forced to rely on others for necessities like food, and basic sanitation, still hold on to faith in change. I have met many prisoners who refuse to drop complaints they have filed no matter how much they are bribed, blackmailed and harassed. It is this kind of intense and relentless conviction that leads to change.

The work that I am doing affects a wide range of people, sometimes communities that are not my own. To me community has always been an intriguing concept. People throw it around, like everyone knows exactly who we are talking about: “the community”, “my community” “your community”.  How many communities can we have and how clear are the lines that divide them? Are they based on race, culture, language, religion, socioeconomic status?

Read the rest of this post (Part 2) here.
Nicole Storrow is an AVODAH corps member in New Orleans working as an Education Advocate at Southern Poverty Law Center. She grew up in San Diego, CA and graduated from UC Davis in 2011 with a bachelor of science in psychobiology. She is passionate about social justice work and issues of intersectionality.

One Response to Re-defining Faith and Service: Part 1