When the police came to drag us out and foreclose on our makeshift home, we were ready for them. We had been planning the action for several weeks, and were prepared for the sensation of being dragged against our will. We knew it would hurt, but we were willing to put our bodies on the line in order to ramp up pressure on America’s financial sector.

Earlier that morning, myself and fifteen other members of SOUL – Southsiders Organized for Unity and Liberation – had set up a home encampment inside Chicago’s Hyatt Regency. This was the site of the Mortgage Bankers Association’s (MBA) annual conference. At exactly 10:45 AM, amidst a vast sea of white men in suits and ties, we quickly unfurled our living room, complete with a small television set and a giant banner that read “Stop Foreclosures Now!” We insisted that we speak with David Stevens, CEO of the MBA, in order to read to him our simple demands of the big banks: write down mortgage loans, pay their fare share in taxes and invest in job creation. 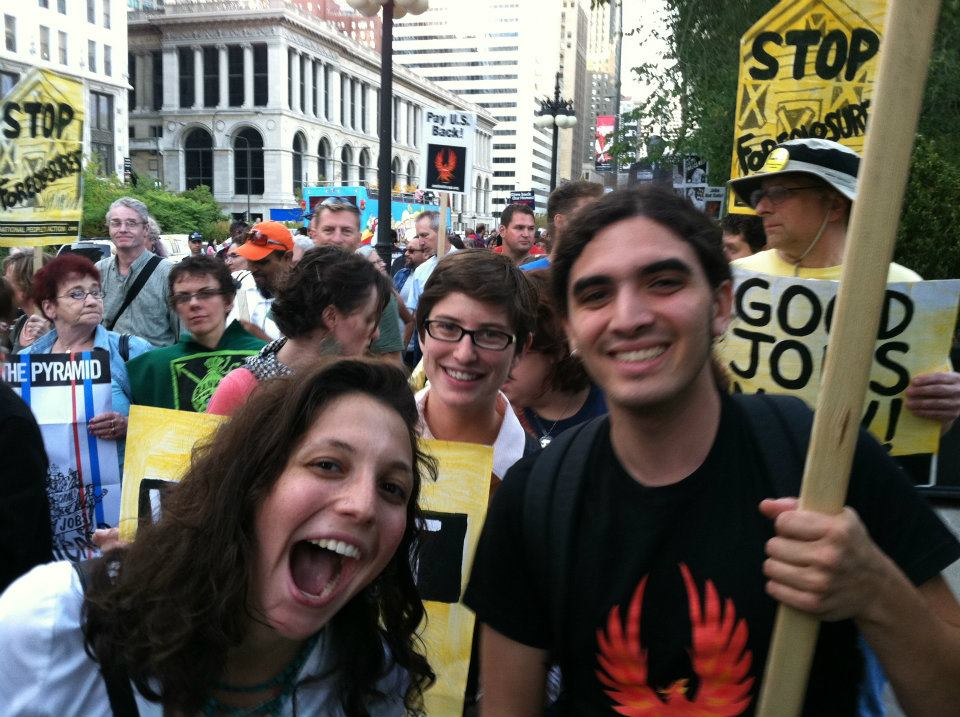 Our civil disobedience was part of a broader week of action organized by Take Back Chicago, an ad hoc coalition created in order to protest the large banks and corporations that crashed the economy. Though the week of action had been in the planning process for months, its timing was fortuitous – for who could have predicted that a widespread protest movement against the financial sector would emerge nearly simultaneously.

The Occupy Wall Street protests have captivated the attention of millions of Americans who, frustrated by unemployment, are losing their homes and can’t keep up with the rising costs of living. They are angry that the top 1%, the people responsible for the financial mess we are in now, has not struggled – in fact, they are richer and more powerful than ever before. Here in Chicago, I have joined with the hundreds of protestors of Occupy Chicago, where we maintain a twenty-four hour protest at the intersection of Jackson and LaSalle – the heart of Chicago’s financial district.

Across the globe, the Occupy protests have breathed new life into the campaign against corporate power. While these protests may dwindle as winter approaches, this new movement is just one important step in a broader struggle to achieve economic justice. Efforts by the unions and community organizations, like SOUL, will continue until all of our demands are met. We will face arrest, we will not stop, and we will win.

Lev Hirschhorn is from Berkeley, CA and attended Brandeis University. As a Chicago Corps member, he is a Community Organizer at SOUL (Southsiders Organized for Unity and Liberation), which aims to empower the Southside of Chicago and the South suburbs to fight for social justice and address issues and concerns within the community.