In Memory of George Floyd

To our Avodah community,

Last week, George Floyd died under the knee of a police officer, gasping that he couldn’t breathe. It is heartbreaking that just a few years after Eric Garner died with these same words, we are back in this place. So many lives gone. So many Black men and women who have died because of the color of their skin and the deeply rooted racism that promotes not only police brutality. Ahmaud Arbery, Breonna Taylor, Tony McDade, Nina Pop, Michael Brown, Trayvon Martin, Freddie Gray, Eric Garner, Philando Castile, Alton Sterling, Delrawn Small, Tamir Rice. And the list goes on and on.

It is this deep-seated racism that has also led to health disparities, poverty, and economic opportunity that fall along racial lines – a reality this pandemic has brought to our country’s attention. For generations, Black lives have been treated as less valuable than White ones in our society. Even when incidents of excessive force by police are captured on video, we continue to see few consequences for such actions. As Jews, we have a responsibility to speak up against White supremacy.

On Shabbat, my Rabbi and Avodah’s “Speak Torah to Power” speaker, Rabbi Rachel Timoner, talked about the connection between the video of Amy Cooper that many of us have seen and George Floyd’s death at the hands of police officer Derek Chauvin. Amy Cooper, a White woman who called 911 with hysteria and lied to police to “tell them there is an African American man threatening my life” after Christian Cooper, a bird watcher, who is also a Black man, calmly asked her to obey the law and leash her dog in Central Park. Christian Cooper filmed the scene that would be hard for many to believe, if it hadn’t been witnessed with our own eyes. He showed us the racism and injustice that many Black people live with – and sometimes die from – in our country.

Racism isn’t new, but video documentation makes it impossible to deny the lived experiences and truths that African Americans and other non-White individuals have experienced for centuries.

As Rabbi Timoner said, “Most of us probably don’t know someone who would press their knee onto a man’s throat while he was gasping for breath until they’d killed him. So we can look at the story of George Floyd and Derek Chauvin and say, ‘well that’s not me.’ We can feel far, far away from any such act. But we know Amy Coopers. Amy Cooper is not far away from us at all.” As Adrienne Green wrote in New York Magazine, there are “millions of Amy Coopers. They could be your boss or your neighbor or your teacher if disturbed on the wrong day.”

We need to stop the killing of Black and Brown people in our country.  And this can’t stop, won’t stop, until we address the systemic racism that is baked into the core of our country. Until we are willing to work together to change the dynamic of race in the United States. Until we recognize, call out and refuse to legitimize the racism that plays out not only in cases of police violence, but also in everyday situations like the Amy Cooper incident. We need to do this, urgently and now, to honor the death of George Floyd, and to make sure his death is the last one. 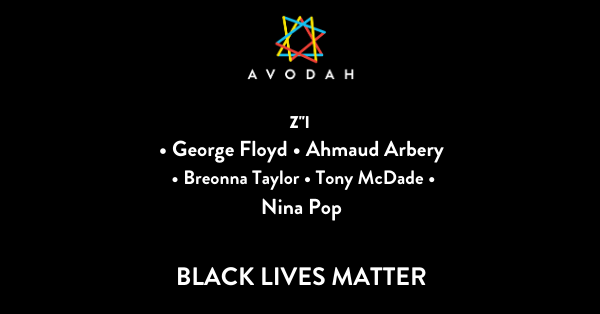 Many of us, especially White Jews are wondering what can be done to upend the systems that uphold racism. An important start is to listen to the experiences of Black individuals, of Black Jews and Jews of Color/Sephardi/Mizrahi backgrounds, whose experiences may be different than your own. Believe them. And then, take action in coalition and community with those who have been leading the charge in their communities to create change. Saturday night, our partner Jewish Community Action in Minneapolis worked with Edot, led by an incredible Jewish leader of Color, Shahanna McKinney, to host a Havdalah service, honoring the moment with learning, with song, and with a call to action.

Avodah has resources for anyone who wants to keep learning including videos and workshops, from remarkable JOC leaders such as Dr. Koach Frazier and Yavilah McCoy to a poignant Shavuot piece by our National Program Director Sarra Alpert on the racial divisions of COVID-19, and “The Torah Case for Reparations” Avodah’s spiritual advisor, Rabbi Aryeh Bernstein.

Zikhronah livrakha – may the memory of George Floyd be a blessing.

If you would like to support organizations working on the ground to address systemic racism, please click here to learn about Avodah’s partner organizations.