The year was 1966. Lynne Wasserman, as an awkward pre-teen, took a formative trip with her father to the Mississippi Delta. Her father, a traveling salesman, sold shoes to department stores in small towns throughout the South. They walked into a small store and her dad introduced himself, and started his “spiel,” while Lynne did her best to hide, like pre-teens do. It is likely this sleepy town had few, if any, Jews and yet within the first few minutes of their conversation, Lynne overheard her dad tell the merchant he was Jewish. As they left the store she inquired into his behavior. Her father told her something that continues to impact her life: “He will find out anyway. I want him to know up front that I am proud to be a Jew. Never, ever, try to hide your Judaism. Be proud.” 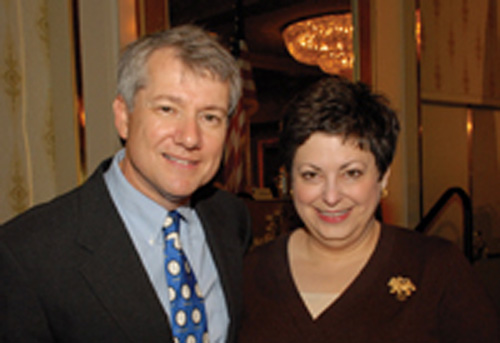 Lynne Wasserman is AVODAH’s newest national board member and a New Orleans native, but at a young age her family moved to Lafayette, the heart of Louisiana Cajun country. In Lafayette, Lynne’s family was part of a small Jewish community and she and her brother were the only Jews at their school. Her years among the fun-loving and  warm-hearted Acadians (Louisiana’s Cajun descendents) were an important and formative time that strengthened Lynne’s Jewish identity. The historically-Catholic Acadians preserve their own language and culture, and while Lynne could appreciate the devotion to their heritage, it reinforced her pride in her Jewish identity. Lynne’s parents inculcated the need to embrace that identity, and she internalized the importance of articulating and defending one’s faith. As she says, “I also learned that every person, every Jew, counts.”  Her brother grew up to serve his community as a rabbi and Lynne became a proud and committed Jew, using her talents in many capacities to organize the Jewish community in New Orleans.  “My brother and and I owe this to my dad.” she explained, with gratitude.

Lynne’s commitment to the Jewish community began in 1985, when she began to set down roots in New Orleans, and she continues to be a powerful force throughout the Crescent City. She is the past president of her synagogue, Congregation Gates of Prayer, a past co-chair of the New Orleans Jewish Federation’s annual campaign, and continues to serve as the co-chair of Limmud New Orleans. Her leadership focuses on creating an intimate and connected community: “What inspires me about this community is its closeness. We all come together for community events, no matter what our synagogue affiliation may be. New Orleans has a high rate of synagogue affiliation (about 75%), but we also have a strong commitment to the overall Jewish community.”

It was not long after Hurricane Katrina when Lynne heard that AVODAH had set up a bayit (house) in Uptown, New Orleans in order to enlist young Jews to New Orleans in urgent antipoverty work. The city needed help, and AVODAH responded. Lynne responded in kind by joining the first AVODAH advisory council in New Orleans. She remembers being wowed by the corps members at the first parlor meeting she attended. Lynne was struck by the intensity of their commitment and their genuine happiness at having landed in the right place at the right time in their lives. After that, whenever she met corps members, they expressed the same enthusiasm and passion, which convinced her of the their authentic commitment to their work and the city. Since then, her valuable advice to corps members has always been the same:

“If you want to make an impact on a particular community, stay there. If that community is New Orleans, stay here. One year of selfless service is wonderful, AND to make a real lasting impact, stay.”

Lynne’s vision of communal life also focuses on shared responsibility and a sense of obligation to the larger community. She will always say that the program, and all its participants are an integral part of our community. That corps members involve themselves in every aspect of Jewish communal life including serving on synagogue boards, teaching at Hebrew schools, volunteering, and even starting their own organizations within the Jewish community, attests to Lynne’s wisdom. The New Orleans Jewish community has always had an important presence in the greater community in terms of supporting projects aimed at eradicating poverty and promoting social justice. AVODAH plays a vital role in that effort.

“These are young, bright, dedicated women and men who want to devote their lives to tikkun olam. They don’t just sit on committees that meet monthly; they fight the good fight every day. So I view AVODAH as an important addition to the New Orleans social justice framework. Our community is SO proud of AVODAH! These are OUR people, at the beginning of their adult lives, working with under-resourced communities to practice Tikkun Olam. We feel like proud parents!!”

AVODAH is grateful to Lynne for stepping into the role of national leadership. Her guidance and love for the program has made it what it is today and created a warm home in New Orleans for the entire AVODAH family. We are inspired by her dedication to the Jewish community and look forward to learning from her for many years to come.