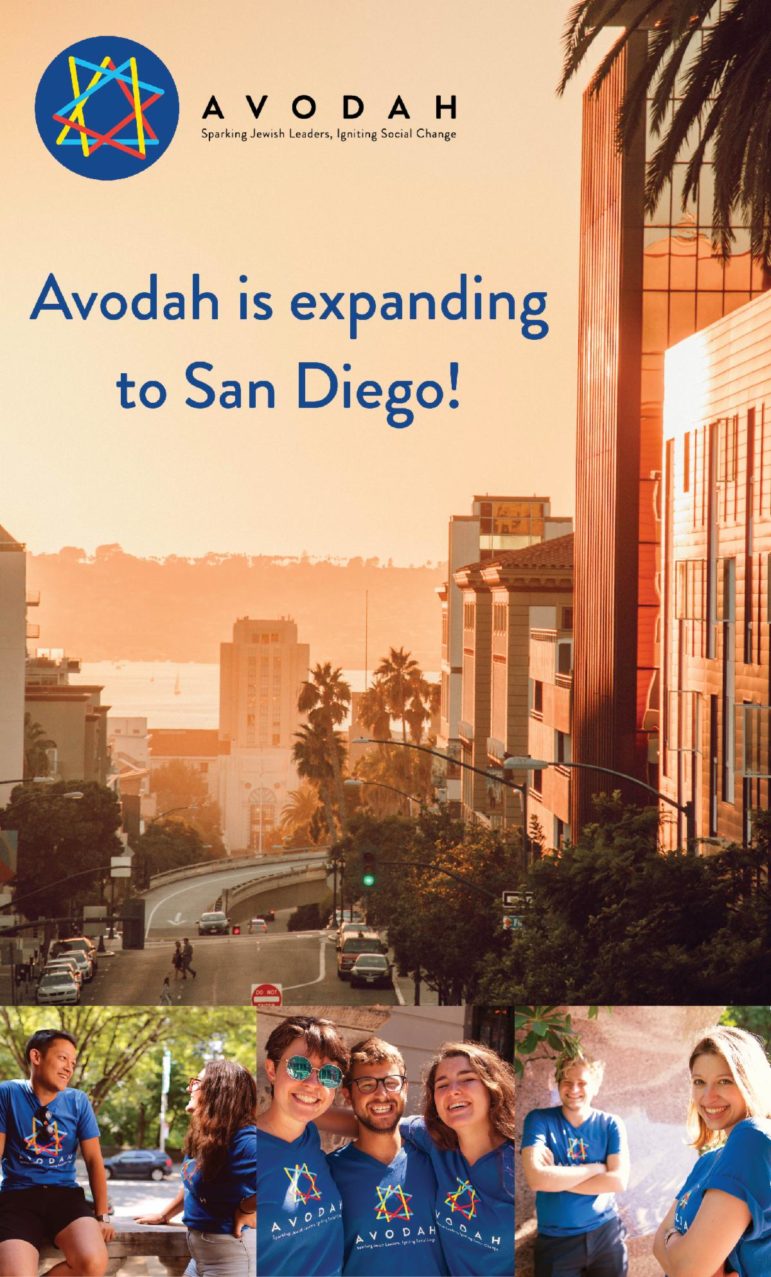 Big news! We are very excited to announce that Avodah is launching our sixth program city…in SAN DIEGO!

Our San Diego site, opening in summer 2021, will be Avodah’s first location on the West Coast. We’re thrilled to head to California and make real change on issues including immigration, refugee and asylum seeker assistance, homelessness, criminal justice reform, and many more.

Avodah San Diego is a collaboration between Avodah and Jewish Family Service of San Diego (JFS), one of San Diego’s oldest and most impactful human service agencies. We’re grateful to be in partnership with JFS, which provides a range of services: from hunger and homelessness, to family violence, to immigration. In fact, JFS is a core partner of the Rapid Response Network, a dynamic collaboration between human rights and service organizations and attorneys and advocates, dedicated to aiding immigrants and their families in the San Diego border region, the largest land border crossing in the world.

Our Expansion to San Diego

When Avodah journeyed to the U.S./Mexico border in 2018 with a delegation of 17 Jewish organizations, we witnessed the devastation of our broken immigration system firsthand.

At the border, we visited detention centers with barbed wires and prison cells, severe lack of due-process, children separated from their families, denial of basic necessities, and people, who were desperately trying to seek legal asylum in the U.S. being met with the most inhumane conditions. This experience was incredibly moving and activating. We returned with a sense of urgency to create a more just system and we knew Avodah could play a role.

San Diego is the largest land border crossing in the world and has been a highly active location for deportations, human rights violations, and abuse. We know creating change takes time and investment. It takes a willingness to continue to work on solutions, even when the topic of immigration cycles out of the news headlines. In launching Avodah San Diego, we plan to build a pipeline of leaders in the region who will enhance the Jewish community’s work on this issue, while also fighting the causes and effects of poverty throughout the region in all of our issue areas including homelessness, hunger, criminal justice reform, climate justice, education, healthcare access, and more.

Since Avodah’s founding in 1998, nearly 1,100 Corps Members have served at nearly 300 social service agencies, adding nearly $20 million in capacity and assisting more than 700,000 individuals facing the challenges of poverty. We are excited and prepared to grow our work to the West Coast and to be in partnership with the top human service organizations in the region.

“This hard work is a Jewish calling. And the work, by its very nature, draws out meaningful Jewish questions and faith engagement. Avodah connects the dots between Jewish identity and purposeful endeavors. What could be more valuable to the Jewish world today?”

We’re thrilled about this next chapter of Avodah’s work. Thank you for being a part of it.