Posted on November 10, 2021 by Marissa Smith-Kenny 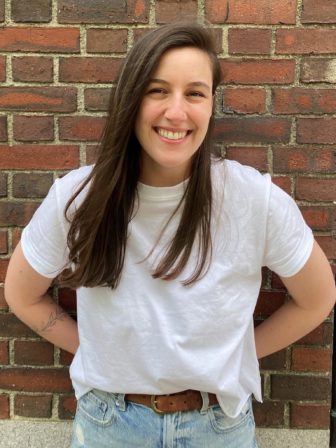 After graduating from Washington University in St. Louis with a degree in Women, Gender, and Sexuality Studies, Avodah Service Corps alumna Leah Starbuck Schuckit (New York City cohort, 2018-2019) knew she wanted to try direct service work. When she heard about Avodah, two things came together for her in a way she’d been seeking for years — Judaism and social justice.

Leah grew up in Carmel, Indiana, a suburb of Indianapolis, which had an extremely small Jewish community. In 2010, the Association of Religion Data Archives reported that, of her county’s 276,000 residents, fewer than 400 practiced Judaism. By the time she got to college, Leah was exhausted from the struggle of seeking community.

“I had spent so much of my life being the only observant Jewish person in many spaces, and I felt I wanted to be defined by something other than being Jewish,” she says, “I effectively stopped participating in Jewish life.”

After some time away, Leah wanted to re-establish her connection to Judaism, but wanted to do so in a way that intersected with social justice. In 2015, she attended a training session for Jewish camp faculty led by Avodah staffer Sarra Alpert, who is now the Director of the Avodah Institute for Social Change. It was through that meeting that Leah learned of Avodah’s programs and approach to Jewish social justice learning and career development.

Shortly after, Leah applied to Avodah’s Jewish Service Corps and made the move to New York City to serve at Sanctuary for Families, an organization that works with victims and survivors of gender-based violence. Over the course of her service year, Leah realized what really energized her was public benefits advocacy and direct services work. In addition to helping her determine her career path, the experience fulfilled her need for Jewish community.

“Avodah was this intersection of the things that I cared about and the way that I was raised, and the values I wanted to apply to the justice work I was doing,” she said. “I was with people who would be doing justice work from 9 to 5 and then come home on Friday and bake challah and sing Jewish prayers. Avodah made me realize this is my Judaism — this is what I want my Judaism to look like for the rest of my life.”

After completing her service year, Leah stayed in New York City specifically so she could continue to be in community with her fellow Avodahniks. It was also a great move for her career; she was hired at Bronx Legal Services, a legal assistance organization that has been working to address systemic poverty for more than 50 years. There, she found even more Avodah connections with one Service Corps alum working as a paralegal, as well as a newly hired supervisor who had been a Corps Member supervisor at another Avodah legal placement organization.

“It was very affirming to be in a space where Avodah was recognizable,” Leah says “Applying to direct services jobs post-Avodah, I don’t think there’s anything more I could have done to be better suited to get a position. I was surrounded by Avodah people in the professional community — and it gave me more people to have Shabbat with!”

Her time in Avodah and at Bronx Legal Services confirmed that she wanted to go to law school, a decision she’d been teetering back and forth on since her college internships in D.C. Working with lawyers who were holding the government accountable and pushing for broader public benefits programs, Leah realized the client-based work of direct services was incredibly energizing, and the puzzle-solving of legal work scratched an “intellectual itch” she had as well.

“I feel like there’s this prevailing idea that the way to make ‘real’ change is by affecting policy, but there is a need for justice work at every level,” Leah affirms, “If all I do my whole life is help individuals who are unable to navigate the system by themselves, that in itself is impact enough for me… I love to be able to sit across from somebody and say, ‘I know this is confusing and my job is to navigate this for you, so you can go to sleep at night and spend time with your kids.’”

Leah is now a law student at New York University and continues to be a big proponent of Avodah’s programs.

“The Avodah service year is such a unique and special bubble of an experience. My advice to current Corps Members would be to just buy-in, 100 percent,” she says, “The best thing you can do for yourself, especially right out college, is to do something intensely different and powerful. You’ll walk away with incredible friends and having had incredible experiences you can continue to rely on for years to come.”