Avodah alum Hayley Rein (New York Service Corps, 2019-2020) has known for a while that she wanted to build a career helping people. Most recently, this aspiration has landed her in Eger, Hungary.

Originally from Brooklyn, Hayley studied psychology and sociology at Stony Brook University in New York. Her college studies helped her discover a love for public health and social science research, a passion she took abroad to India as a participant in the Edward Guiliano Global Fellows Program and recipient of the Gilman Scholarship. She graduated in 2019 and joined the Avodah Jewish Service Corps shortly after.

“I have always wanted to engage in advocacy work,” Hayley says, “I wanted to dedicate my career to helping people in a tangible way. Avodah gave me an opportunity to do that.”

Hayley spent her service year working as a paralegal for the New York Legal Assistance Group (NYLAG), an organization advocating for people experiencing poverty. In her role with the Evelyn Frank Legal Resources Program, Hayley assisted elders and individuals with disabilities with navigating the public health insurance system. By day two, she knew for sure she wanted to go to law school.

As she sought to continue advocacy work post-Avodah, Hayley’s former college fellowship advisor directed her to the U.S. Fulbright Student Program, a competitive grant that gives awardees an opportunity to work abroad for a year. Her application, requesting a placement in Hungary, was a success. In September, she made the 14-hour journey from New York to Eger, a small Hungarian city she describes as, “right out of the page of a Disney animator’s sketchbook.” 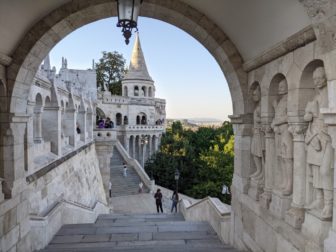 Hayley will spend the school year as an English Teaching Assistant at Eszterhazy Karoly Catholic University. Her Fulbright position also includes projects specific to Eger’s Roma students, an ethnicity which has its origins in northern India.

Preservation and documentation of this culture is important, as centuries of persecution and prejudice have attempted to eliminate Roma altogether. One of the groups targeted by the Nazi regime, persecution of Roma people drastically increased in the 1930s-1940s. Historians estimate that 500,000 Roma were murdered during this period, but it is likely that many more deaths went unreported. In the 21st century, human rights violations, including forced sterilizations of Roma women, continue to be reported. Roma families are often still kept from equitable access to education and viable career opportunities.

Over the course of her fellowship, Hayley is collaborating with Roma students to produce a publication about their lives and culture (for example, a cookbook) and organize culturally affirming programs for students of all ages.

“The students are reserved and reluctant to speak English because they don’t want to get it wrong. I think it’s probably intimidating to try and speak English to a native New Yorker!” Hayley says, “But these students are some of the smartest, most innovative people I’ve met.”

While she is technically there to teach, she’s committed to learning, too. Hayley wants to learn Hungarian, a notoriously difficult language. In most meetings at the university, she elects to forgo the use of a translator to better understand the language.

“So far, I’ve learned to sit back a lot. I don’t understand what’s being said, but I can still understand the dynamics of the conversation — who’s cracking a joke, who’s leading the conversation… I’ve realized that so much of communication is nonverbal.”

Hayley’s interest in the Hungarian language and culture is personal, as she is from a family of Hungarian Jews. Her Jewish identity informs her interest and passion for working in social services and the public sector.

“My family’s experiences in Central Europe and subsequent events in the U.S. have helped me develop a level of empathy that drives me to work with similarly marginalized groups,” Hayley explains, “Though my background is Hungarian Jewish, I recognize the extreme privilege I have as an American and a native English speaker. My Jewish identity and values system prompts me to want to leverage that privilege to help others and be a force for social change.”

She also says that the work she did at her Service Corps placement influences how she works with the Roma students. “Working as a paralegal taught me about person-centered advocacy,” she says, “I can utilize my role as a platform for elevating the voices and perspectives of my students to ensure that their experience and expertise informs programming and direction.”

To continue following along with Hayley’s Fulbright journey, check out her blog.